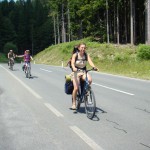 That’s what most of us thought this morning – or at least the group writing this blog did! After a full day of relaxation and enjoyment it was hard to leave the blue beauty, better known as “Weißensee.” But it was not up to us, we had to move…so we headed off toward Kraß (near Hermagor). 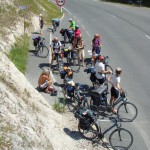 “It will only take us about two hours” the guiding team announced. That caused some chuckling in the group, as we all know, that we never arrive on time. Read on to find out whether we managed to stick to our timetable! We left at 11:30 and started up a steep, windy road which left us with sweat pearls dripping down our foreheads. Then came the, oh so anticipated, downhill ride and let us tell you, it was well worth the hard work. Feeling the fresh air on our faces, cooling our sweat, enjoying the mountain views and letting all of our joy out with a loud “wohoooh” – the ride nourished our souls.

Leaving the main road, we took a bike trail and upon reaching the next village, we came across a little fountain and filled up our bottles to stay hydrated. Then suddenly “splaaash” a waterfight began. Let us say nobody stayed dry!

Continuing our ride, we took an “off the beaten track” forest road, but we must have somewhere taken a wrong turn. Going uphill again we were quite upset when we noticed, that we ended up on a dead end road. We couldn’t stand the thought that all of our hard effort would be for nothing. So we opted for a small footpath; however, we didn’t know then what kind of adventure we embarked upon. Not just one fallen tree blocked our way, but several lay directly across the trail. One bike after another was heaved over or pushed under these trees. But as you know, “no sweet, without sweat.” We were rewarded by a beautiful waterfall and decided it was a perfect place for a lunch break.

Eventually, we managed to reach our final destination for the day, a farmer’s house in Kraß. As soon as we saw the house Dani said “I could really imagine to live in such a house sometime.” After our “tour de detour” we all had a little rest in the grass. After that we split up and some went to Hermagor to indulge in some frozen deliciousness, while others went to a lake nearby and a few chose to stay and help with dinner. Mirjam, for example, who stayed said, “I just want to stay here – it`s so beautiful” When Lisa was asking what we’re having for dinner, Maegan jokingly said “On va manger crotte de mouches.” Google translator is your friend! Actually we’re having a barbecue and all of us are looking forward to it. After that we’ll have a campfire, grill marshmallows, sing campfire songs and might as well dance around the fire.

We almost spared telling you the good news. We worked on a press release that will hopefully be published in many newspapers tomorrow. To support our message we produced an awesome video about the Riverwalk project. Mirjam put many hours of work into it. So make sure you check it out! 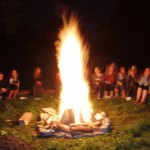