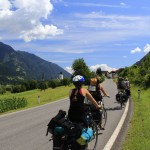 We started our beautiful day quite early, but not too early; one of the group’s best consensus decisions. Our motivation was high and the preparation went very smoothly, was well organized and quick. After a gospel inspired motivation song before departure we saddled our bikes and hit the road. Sun was shining from a blue sky and an easy breeze was refreshing our bright eyes.

In the very beginning we started the first steep part. Although it was very short, it was a great indication of what was ahead of us. Reaching a slight downhill section was a real relief and our guides were leading the way. After approximately 10km we reached a splitting point where we needed to decide which way to take to climb the steepest part of the day; ca. 4-5km of uphill and several hundred meters. The group decided to split into two groups. One took the asphalt road and the othes took the gravel road. Jure, Neza and Domen took an asphalt road because they decided that they could do it without having to push their bikes. It was quite difficult and uphill the whole 4,7 km. But they made it and their sweaty, salty lips changed into big smiles.” We made it!” they exclaimed! All that was left was 1km of easy downhill and the lake was in front of them. On the entrance to the camp Lea was already there with a car. Bikes were parked, swimsuits were pulled on and hot bodies sank in to the lovely “white” water of a precious Weißensee lake.

After a while the other group arrived as well, they had a beautiful ride (or pushing) uphill as well, a little bit slower than the other ones, but the view was great and everybody was proud afterwards. Eva said “I never thought I would make it up there, but I did it!” The smiles when they arrived were as big as the challenge had been.

After everybody arrived at Weißensee the whole group enjoyed the free afternoon spent in the amazing surroundings. Some of us wrote an emotional and intense press-release to answer the political discussion about the Isel, Natura 2000 and hydropower question that is taking part right now in Tirol. You will hear about that tomorrow!

We finished the afternoon with a delicious dinner and Judith , Ian´s girlfriend, joined us and our family gained yet another member. Night came down on us while we were still finishing our work. At the end we all gathered again around our first Riverwalk open camp fire, which´s heat warmed our smiling hearts and tired bodies. Stay tuned! Love ya!!

One thought on “The long ride up!”