We woke up to a cold and rainy morning. After breakfast, the rain stopped and we did some activities outside. At that time, National Park Hohe Tauern park ranger Andreas joined us. Then he lead us along the Isel river up to the Umbal waterfall. Along our way, the first stop we did was beside the river, on the gravel bank where the hydropower plant directly on Isel River is planned. 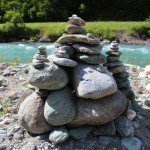 We were discussing the project that is planned at the Isel river, that is 12 meters high dam, for the water power plant. Behind the dam, lake will flood the gravel island on the Isel and the place where we stood will be gone forever. We wanted to mark that special place and to give people that are coming behind us knowledge how important that place is and that it can be lost due to the proposed dam. We made stone towers from pebbles to remind people how fast we can lose this precious place. We are appealing to all the people that are aware of the importance of free-flowing rivers- now the last 10% of them in the Alps (the Isel is one of them!), that they join us and make a stone tower. The location has number 2 in our marked way that you can follow! 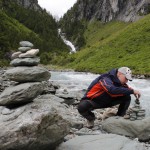 Further up in the valley we found some blueberries beside the path. How delicious they were! 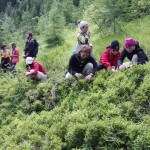 Later on, we reached a wider path and followed it further up the valley. We saw a lot of small waterfalls on the left side of the valley. We continued and soon reached the Umbal waterfall. It is so impressive how much water is running downstream! We took some photos and continued a few steps further to a nice grassland plateau. 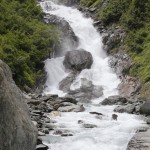 The time was right for lunch, so we enjoyed it there beside the river.  After lunch we found the perfect place for another location for project QR-code that leads to the website with the guide how to follow our way and some information about the place and why it is important. 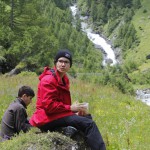 After lunch we did another group activity, we got a little bit into art! Each group found some objects along the way and then they made a picture with them. Other group has to re-do the same picture with prepared objects. The group that re-made it first won! 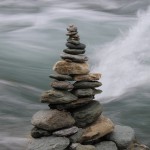 We returned to the camp, did a short meeting for tomorrow and prepared the dinner. Tomorrow morning we are going to hike to Prägraten where the Iselfest is taking place! 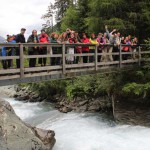