After our day of hiking without backpacks we continued our journey from Rosenburg to Gars am Kamp. This day we had only a fairly short walk of 10 km to manage, because at two o’clock in the afternoon Fabio of the Riverwatch team joined us and held a talk about the last free-flowing rivers in Europe. Two journalists and some interested locals joined us as well to discuss the recent developments. Firstly, Fabio explained the natural development of the structure as the river grows and the significance of the possible interactions with the groundwater and the riverbanks. Then, he visualised the dimension in which we build dams in Austria. On average every 900 meters a dam makes it nearly impossible for the river to develop the required habitats for fish and insects to be self-sustaining. He highlighted that his work is mainly focusing on preserving the genetic material of the fauna and flora in the last free-flowing river systems and not about acting against every waterpower plant or dam. Fabio outlined that in Europe more than 80% of the waterpower plants are small ones, which produce in comparison to the big ones, like the Danube power plants, only 3% of the overall gained energy out of waterpower. In conclusion, the final message Fabio brought us was about the removal of several small power plants in the last rivers with longer free-flowing stretches and that they would not even have a noticeable impact on the energy gained out of waterplants. Making the big, impactful power plants more efficient in their performance in order to get rid of fossil fuels as our main source of energy definitely has some potential. However, putting dam after dam into the last precious, free-flowing rivers we have, for sure, does not.

Fabio empowered us with his positive nature and his passion about this topic. We want to thank him again for his visit. After that demanding program, we cooked together and spent the evening playing games, where some Riverwalk members showed off some impressive acting performances. However, the members who have biologists as parents did not make a lot of new friends. In the next morning we had to pick up our borrowed bikes and continued with this new means of transportation to Langenlois. Afterwards, one journalist visited us for some information about the reason of the strange way we decided to spend our holidays. The rest of the day we enjoyed the Kamp in the local bath, some of us visited the Loisianum or embarrassed themselves in volleyball games.

Looking back on our nearly finished journey we will probably enjoy our last evening with one or two well-earned beers and reflect our way together. On which we not only had the possibility to get in touch with the river and the political issue of the Rosenburg powerplant, but also to experience the 24/7 life in a group and to develop our personalities along the way. I think I can speak for the whole Riverwalk group when I say, we are extremely thankful to the WWF and Tim Pauli for making this remarkable experience possible! 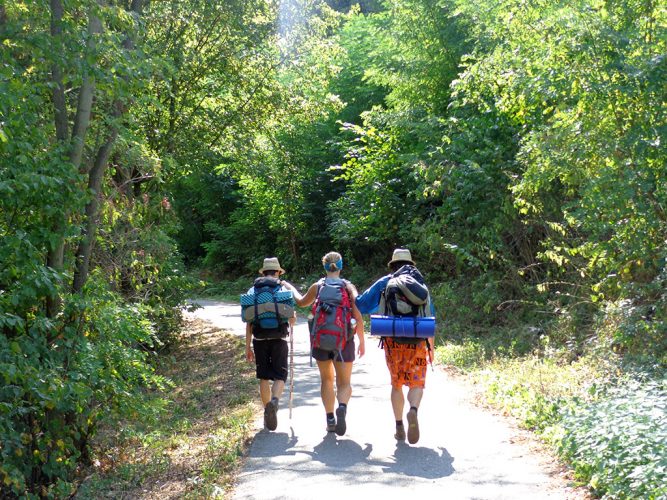 It’s been two days since our last entry. However, a lot of things happened in this short time frame. Jure, a dedicated old timer when it comes to Riverwalks, left us on Monday when we headed from the Dobra Dam to a representative of the local initiative “lebendiger Kamp”. After a fairly short hike we arrived at his place. He informed us about the rather shady circumstances under which an expansion of the dam in Rosenburg is being discussed. The amount of energy the dam currently produces isn’t much. This expansion would imply to build a new dam behind the old one which is slightly higher. Furthermore, it is planned to deepen the river bed over 1,5 kilometres to increase the difference of height to get more energy out of it. However, the amount energy which will be generated more is in comparison to the overall costs of that project extremely small and can in the end be compared with one wind turbine. An environmental consequence would be that the water flow will slow down even more. As a result it destroys the natural structure of the Kamp and the habitats in which the fauna and flora is dependent on. Maybe this argument sounds bearable, but it becomes stronger when we think of the fact, that we lost already over 90% of the free flowing water bodies in Austria due to dam constructions. Additionally, we are talking about peanuts when we compare the amount of energy that is being produced to Danube hydroelectric power plants, which are contributing a significant part to our energy demand. After an interesting discussion with Clemens, from the local initiative, we went to sleep at a truly remarkable location, even for Riverwalk standards. Of course, referring to his organic garden.

The next day we took a long hike to Rosenburg. The environment we crossed along the way was probably the most beautiful up to this point. This is very easy to measure, by the way. You just have to count how many times someone stops to take a photo. Anyways, we walked a lot next to the Kamp, which has a lot variation in its flora and fauna at this point. One can imagine the biodiversity in this valley by the fact that we were watching two kingfishers flying along the Kamp while someone else spotted at the same time a beaver cruising around in the shallow water. In the end, we passed the power plant in Rosenburg and shortly after arrived at our sleeping point.

Today, we made a break from hiking and instead met Hans, a local biologist. Together we went back to the power plant where he gave us further details about the ongoing conflict, concerning the dam. Furthermore, we discussed the possible consequences for the environment in case of an expansion. Later on we walked around the area and onto an old castle while talking about many topics surrounding the interest of the local citizens. We went back to our place at around seven. By foot. In conclusion today wasn’t really a break from hiking, was it? 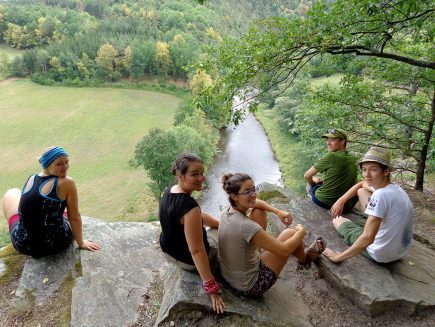 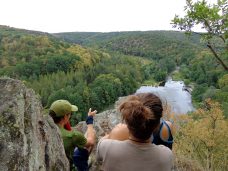 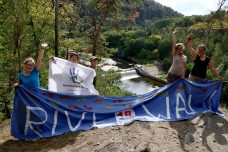 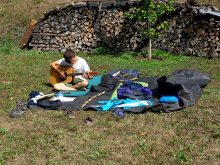 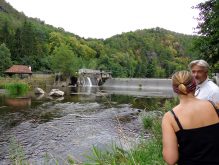 It has been a while since the first blog post due to some unexpected changes in our program. Two days ago we were not able to settle down at the meadow that we had planned. It was a challenge to find an appropriate alternative to put up the tarps. The only suitable place to stay forced us to carry all our equipment out of the car, over the river, which seemed frustrating at first, because we thought of all the weight of our mobile kitchen, but with a chain of Riverwalkers it was easily done. Just like the river, the demand of Compeed bandages (for blisters) grows each day.

Joel, one of the Riverwalkers, discovered the passion of carving along the way and we are glad to see that the amount of cuts (not on the wood) he is getting per day is decreasing steadily. Furthermore, we started to play some games in the evening which is the reason why some of us are going to get haunted by domesticated animals in their dreams, and we had some heated discussions on the campfire.

Magdalena, a Generation Earth member who currently works with WWF-Austria on an European water campaign, joined us recently and held a workshop concerning her work.  She presented facts, like:

She also gave us an overview on European policy making in water legislation. Currently a so-called, “fitness check” of the existing European water legislation is taking place. Which means: the protection of our rivers is in danger. After the workshop we discussed possibilities to raise public awareness for river protection during this sensitive process of policy making.

We discussed for example actions than can be done during the European water conference in Vienna this September.  For example, check out this amazing event called Water Bodies being organized by some Generation Earth members: https://www.facebook.com/events/370768170120248/

“Water Bodies is a Flashmob that will combine artistic expression and environmental protection! Generation Earth will host the event together with the renowned choreographers AIKO KAZUKO KUROSAKI and DARREL TOULON, with music from ELECTRIC:INDIGO. Event will take place during the European Water Conference from September 20-21 in Vienna.“

After this interesting input, (thank you Magdalena :), we had lunch – mjammy – and started to walk again. 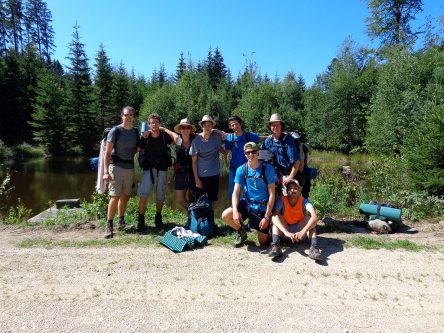 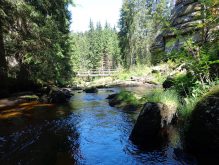 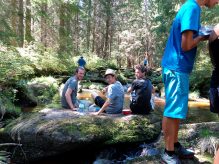 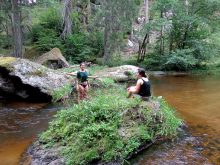 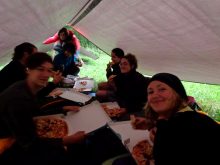 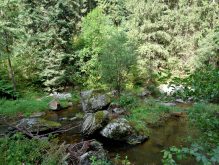 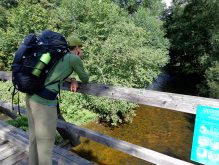 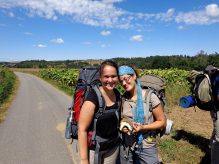 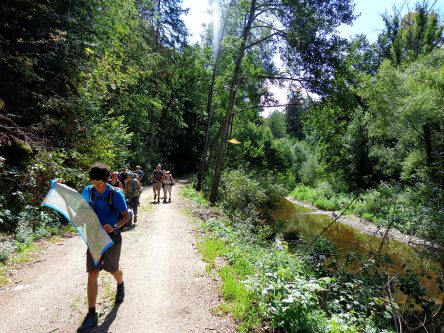 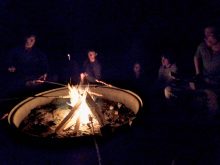 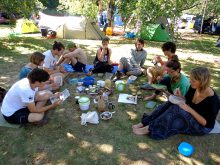 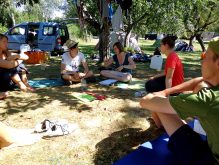 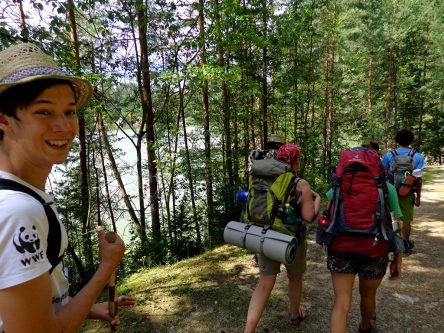 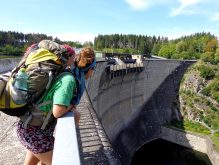 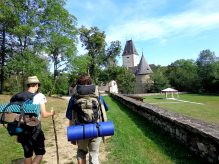 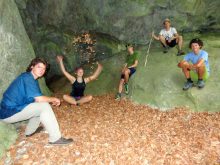 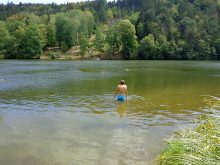 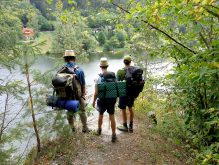 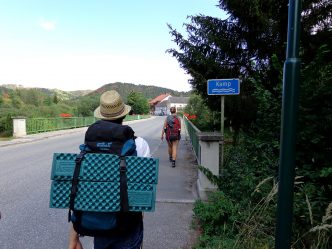 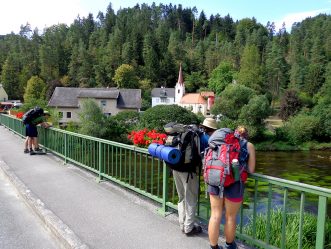 Two days ago the Riverwalk team met in Liebenau (Hirschau) to get to know each other. We had the possibility to talk about safety, cooking and some basic rules during the walk. Shortly after we were sweating because of the high temperatures, a local storm caught us by surprise. We immediately searched shelter under our tarps while the rain quickly turned into hail. It got pretty heavy and lasted for about an hour. Our team spirit got tested early on! In the end we managed to keep us relatively save and dry and the sun later on helped us to completely dry our stuff for a surprisingly comfortable night under the tarps.

Today we finally started our walk. We found quite a lot of berries on our way to Komau, our final destination for today, which made the heat more bearable. We arrived after approximately 5 hours. Afterwards we enjoyed the refreshingly cold water of the Kamp where we took the chance to take a bath after the tiring walk. Now we are preparing everything for the following night. 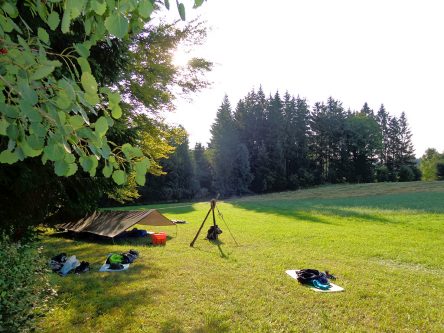 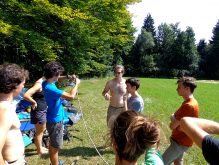 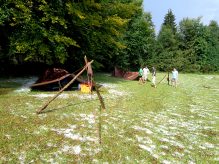 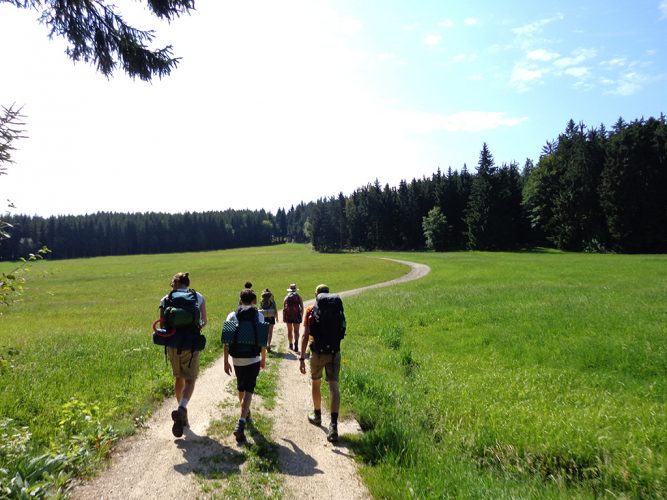