Imagine wandering through the amazing wilderness of Northern Albania.  This could be you if we get a positive response on our newest application for Riverwalk 2016.

According to a recent study by Riverwatch, over 2000 new hydropower plants are being planned in the Balkan region. The entire river system in Albania is under severe threat, stemming largely from a lack of strategic planning, inadequate impact assessments, improper public consultations and lack of transparency. In response, WWF and local partners recently issued a hydropower moratorium initiative. Riverwalk 2016 would draw attention to the situation and support the protection of wild rivers. The Valbona river (this river is the heart of Valbona Valley national park and yet, there are plans for four new hydropower plants) was selected as the perfect location for the next Riverwalk!

Due to economic difficulties, large numbers of people are emigrating from this region. Albania is one of the poorest countries in Europe, with a rising poverty rate of 17.9 percent and a youth unemployment rate of nearly 32.5 percent (2014). One-third of the population has left the country in the last 25 years leaving a resident population of 2.89 million. In the first half of 2015, thousands of Albanians sought “economic asylum” in the European Union.

Riverwalk 2016 would not only highlight local, environmentally-friendly economic development potentials by promoting ecotourism as a key concept but also attempt to break down stereotypes and prejudices, build bridges and establish new partnerships.

There is still much planning to be done, but below you’ll find a possible route for Riverwalk2016.  What do you think? 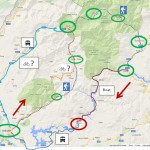 Although we won’t know about the funding until April, we will likely start the application process for the next Riverwalk in the next few weeks.